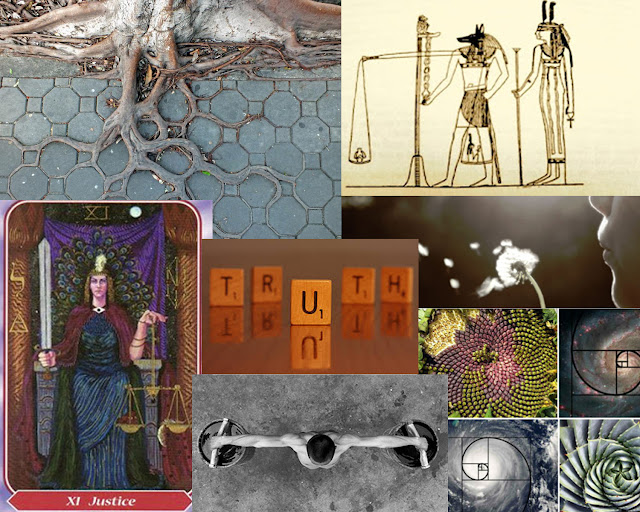 *This post was originally written 5/6/2011 and never posted as I was still contemplating and playing with it. I found it recently and it syncs with life both outwardly and inwardly right now so I thought it was time to put it out there! Here we go...

Let's explore some words, looking at their etymology and meanings we've derived from symbols in previous posts.


under- = beneath, between or among

I've had judgment and the underworld on the brain. I'm attempting to dive deeper into the meaning of Maat weighing the heart against her feather. I think this is commonly interpreted as a comparison of the purity (lightness) of the heart with that of a feather, but this has me imagine the scenario similar to facing judgement before the pearly gates of heaven. This traditional image is just unsatisfactory to me. I find myself wondering, "Why? and What for? What purpose does this serve in the natural order of things?" So I've started breaking down the meaning of the words to get a bigger picture that can be interpreted in more ways, as for some reason having more questions, and having more options of paths to run down is what brings me peace and understanding. So here is one such scenario I have come up with so far:

The feminine divine ordering principle of the universe (Maat) : carried (weighed) the wish (feather) toward and from (against) one's center (heart).

To me, using these alternate words brings new meaning to the symbol. A symbol of the law of creation, that what we dwell on we also dwell in. That what we see, think, feel, and do is informing an inner part of us on what to make manifest.


*Interesting that the above song is from Disney's Pinocchio, about a wooden boy who longs to be REAL and his nose grows when he tells a lie/untruth.

By the way, I'm not saying that the above IS the meaning, or is THE meaning, but as usual I am just exploring meanings and possibilities surrounding Maat, the goddess of Truth.

What we deem as "true" is what we perceive as real, something that appears well formed, accurately shaped, and as steadfast and true as a tree. Truth is an exchange of faithfulness. Because the truth has proven to be faithful/constant we believe and trust in the truth, which perpetuates the truth, and the cycle continues. In fact, the FACTs that we believe are true, are really actions, events, occurrences, doings, experiences, and even "evil" deeds that have taken place. Evil is bad and wicked. But BAD is just being inferior in quality. When we look at the hierarchy in the process of creation: inspired from the all pervading mindstuff, to feeling, to thought and finally to the physical/material (as expressed by the Tetragrammaton), the material is actually just the lowest, most inferior piece of the puzzle. Below the superior inspiration and design. Wicked is a word derived from wizard. A magician uses the divine principles of creation to bring wishes into form. We are all wizards, witches and magicians, most of us are just casting our spells unconsciously. So a fact is a magical act.

The universe was created when god spoke. So what god had to say was really important to what was to be formed.  What are you saying in your own life? It's interesting that the word "addiction" means devotion, tendencies, habits. You could call it ritual. Even more revealing is that it comes from "ad- "to" + dicere "say, declare". This is important, because it shows that anything that you devote yourself to is an "addiction", it is what you continually, habitually perform, think, hold dear and thus becomes what you are saying because it yields results in the formation of your life.

We create our universe, and yet what we have created is simultaneously creating us.  I was looking at trees (trues?) the other day, thinking about how the direction they grow is based upon their environment - the way the wind blows, what is blockading them from growth in a certain place - such as a structure of some sort, dependent on the quality of the soil where they are located, how much sunlight and rain they take in, etc. But trees influence their environment too, their growth changes the landscape, their life creates oxygen which is crucial to the life of all other things.  We are the same way, we grow where the energy flows, if there is a blockage of some sort, our growth is stunted in that area and we will grow in another. Growth doesn't always imply a "betterment" either, it's just a building upon wherever the most energy is placed. Yet we are creating and shaping our environment all of the time too. There you have it, you are as divine as a tree. That's the truth. Food for thought. It's 2017 and I'm contemplating this all once more. Questions I'm facing are - Where have my "facts" that inform my life come from? What is my source? Have I learned from experience, by action and work? Or have I only listened and read the experience of others and attempted to create based not on my own physical, first hand, inner knowing but on the truth of others?
To be continued...


posted by crystal rose at 3:21 PM No comments: 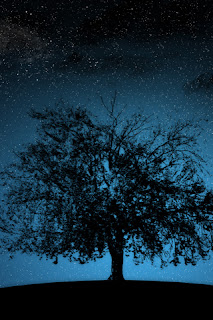 The trees are rooted in the deep, moist, dark earth.
They reach toward the light with the strength they gain from the dark.
If they are uprooted from this dark source of power they don't have the support they need for growth.
The dark earth is the womb - it nourishes with what it has absorbed, been filled with.
All that attaches and grows from that earth womb is a reflection of what has been there before,
a representation of what has been absorbed and passed on.
The fruit of attachment
What emerges from the dark does not have to be frightening
As you walk through the black of night, imagine a loving caress rather than claws
Whatever you sense there is a part of you

It has been 4 years since I posted on this blog. Recently I was looking through it again and found the above unpublished post written on this day, October 14th, 3 years ago. The night before my son was born. His birth was one of the most empowering experiences of my life thus  far and this post captures exactly my mindset going into it. What a nice little time capsule to stumble upon!

He was born at home after 15 hours of labor. I remember the final 5 or 6 hours being intense and powerful and beautiful. I was surrounded by the support of my husband, my mother, my doula, my midwife and her assistant. My husband was so in tune with me and made the perfect playlist of songs to lose myself in. Most notably I remember First Aid Kit and Massive Attack. I labored in the water in front of our large windows that looked out over the trees. The trees gave me strength and peace. I remember it feeling intense and powerful, and honestly I was blown away by that intensity for days afterward, as I relived the contractions in my mind. But I don't remember them as painful or frightening, just the most intensely, primal experience I had ever had. It was so obvious that my body - the deep, dark earth - knew what it was doing. The weather was intense too, stormy.
"We did it" I remember saying to him the moment I met him. My big, warrior boy, was born screaming and quickly quieted down to stare at us all with just one eye open. Happy almost birthday to my 1st son ♡

posted by crystal rose at 9:48 PM No comments:

I am so grateful to be a part of this collaboration with such amazing, beautiful, insightful individuals. It has been churning and crystallizing, and is finally here! 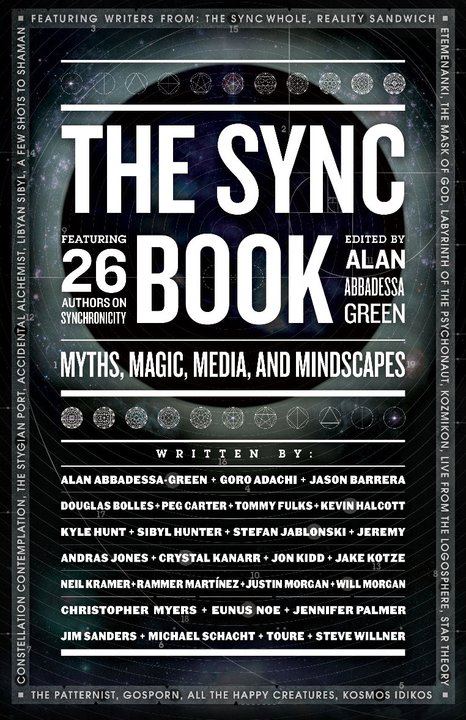 "26 bloggers/writers/artists share their experiences and perspectives on the strange and beautiful universe in which we live."


Since we entered the sign of Virgo in late August, the High Priestess archetype has been all around us. The High Priestess in the Tarot is associated with the Moon (which is the esoteric ruling planet of Virgo).


"The moon reflected on the surface of the water symbolizes the idea that is reflected in the form." ~ The Crowley Tarot

It is all too appropriate that The Sync Book would come to fruition during the Full Harvest Moon (in Pisces), but even more special is that today I realized that the book was conceived on the exact day of  the New Moon in Pisces back in March. The new moon corresponds to the time of seeding new ideas, putting our hopes and dreams into the womb of the mother, so that we may start the process of nourishing that which we wish to manifest. The full moon corresponds to the part of the cycle in which the fruit of our hard work has fully formed and ready to be harvested. The sign that the moon is traveling in at these potent parts of the cycle, shows the energetic expression of that which is manifesting. The cycle is always happening, whether we are consciously working with it or not. This book is the perfect example of what inspiration, vision, intention, love and effort can bring!

Pisces is a mystical, intuitive, water sign, resonating with the collective unity of all things, which the subject of the book, synchronicity, continually expresses.


"Pisces, last of the water signs and the completion of the zodiacal cycle, embodies all that is most compassionate, most universal and most deeply connected with that deeper reality which underpins the whole of existence." ~Liz Greene, Mythic Astrology

La Lune/The Moon - the tarot card associated with the sign of PISCES, and the Hebrew letter Qoph
The Sync Book definitely embodies this energy through and through, I have no doubt that you will be inspired and embraced by the words of all of the individuals who put their hearts and minds into its pages.
You can now exchange your energy for your own copy at createspace or amazon.com

I'm feeling such gratitude to the universe, to the co-authors, to all the lovelies that are supporting this book, thank you.
www.thesyncbook.com
https://www.facebook.com/TheSyncBook
http://twitter.com/#!/SyncBook
posted by crystal rose at 12:59 PM 1 comment:

birds of a feather

crystal rose
Thoughtful: literally full of thoughts, and so as I learn and ponder the universe, I have decided to let the overflow spill out onto this blog. It's amazing the way that images can relate in the mind (especially the subconscious) without the need for words - and so I have formed collages to represent my thoughts, feelings, and connections I am seeing, and included inspiration from others. It's like a game of connect the dots! I hope it speaks to you as well.

the mask of god